skip to main | skip to sidebar

Making a MeeGo kernel package for the Joggler

This is a guide to how to make a kernel package for MeeGo for a given device, in this example we are using the Joggler, a Atom-based 7" touchscreen computer and hackable to run Linux.

This is highly technical and you're supposed to know what you're doing :) It is expected you know at least about git and have a OBS account with access to MeeGo weekly or daily Trunk. It is also assumed we cannot send these patches for official inclusion (let's play that we're under NDA) or get help to add new configurations to the MeeGo kernel packaging from the kernel guys.

This text is similarly licensed with that of wiki.meego.com as to enable inclusion of things from here eventually.

Starting out - we have a device, some patches to add board support and a kernel config.

First off, clone the MeeGo kernel source (this git tree represents what is in MeeGo trunk at this instant) on gitorious:

Now that we have cloned it (and I assume you have it in your kernel-source directory in your homedir), we can start adding support. The important thing to remember is that *.spec is automatically generated in this repository. If it was up to me, these wouldn't be part of the git tree, and just automatically generated.

First, we have to add the joggler specific kernel package. You have to do this in multiple places.

Now you can do 'make joggler' to get a kernel-joggler.spec. You'll need to regenerate this in a bit, but take a look if it's been done right.

We have a configuration for the Joggler kernel, let's call it joggler-defconfig. What we now need to do is to find the differences between the generic configuration (config-generic) and our Joggler specific configuration.

In the git tree there is a tool called configdiff.pl which is excellent for this kind of thing.

Then go through it and see if there's any options that really needs to be there.

Now, we want to try to make our first test compile in OBS. Make a package 'kernel-joggler' in your OBS, point the build target towards something containing MeeGo Trunk/Core. Check out your kernel-joggler project and grep Source kernel.spec.

These files are the ones (along with everything in patches/, kernel.spec and kernel-joggler.spec), you will want to drop into your OBS package. Grab a Linux kernel version while you're at it and put it there, URL is in Source0.

This usually means there is some kernel options in the resulting merge that aren't set - ordinarily this would be asked interactively, but since we're building inside a OBS, this isn't happening.

I fixed this in my config-joggler like in this commit.

With this fixed, I was able to have my first kernel-joggler built :)

In order to add patches, this is another tale, but scripts/sequence-patch.sh --quilt will set up a tree for you. The 'series' file is the one you need to use, and then re-make *.spec files. There is a guide in README.workflow how to deal with this.

If you git pull from the kernel source, you might get conflicts in *.spec, - just get everything that comes from kernel-source upstream and re-make. kernel.spec.in is what is important.

Have fun porting MeeGo to your device! If you can, work upstream in Linux kernel and submit patches mainline. Work as if you would eventually include patches in upstream.

For ARM devices, you can come by and contribute to the effort in #meego-arm on irc.freenode.net. Approach on ARM to kernel packages there is quite similar.

There's no big howto. Just compile the modules for your tv stick, install an app like kaffeine and let it rock!
Posted by magician at 02:48 3 comments:

Running the original Software out from your linux distro!

Ok another smart how to, so you will be able to start the original software from your linux distro:

9. now you can run the software by double clicking on "starto2".
You can also create a shortcut to this. Quit the app typing "ALT+F4"

Note, that also mouse + keyboard are working this way :-)
No way yet to quit the app withouht keyboard.

Dual Boot on the Joggler

How-To Setup a Dual Boot on the Jogger! 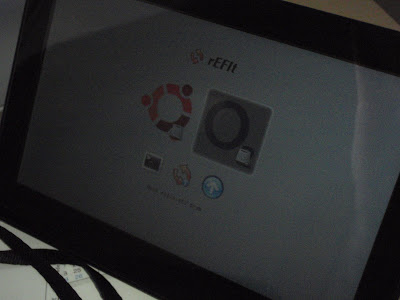 I prepared a little package for you to have a nice dual boot screen at bootup on your Joggler.

Without a USB stick plugged in, it boots the internal System after 5 seconds.

With a USB stick on the Joggler, the boot screen shows you two icons, one for the o2 Software and one for your USB linux, which will then be the default system!

All this can be controlled by a plugged kayboard after the 2nd boot!

5. On booting, press several times "ESC" to stop autoboot. Now enter "fs0:boot" blindly and you should see refit coming up.

This way, Refit is added to the internal (nvram) bootloader list. That's needed to have a working keyboard.

8. Type "bcfg boot dump" and look if Refit is located on top.

That's it - Refit now should always load automatically. In case, you have a USB stick plugged in, you can choose between USB and internal system. Otherwise, it just shows the internal system and boots it after 5 seconds!

I just spent some time getting IEGD kernel module working on 2.6.33.2 and got some fancy glxgears on my Xorg now.

For patching into a kernel:

We have been having some issues with ELILO and large initrds in the #mer channel on irc.freenode.net, so we started investigating GRUB2.

For the technical side of these problems: GRUB2 did not pass correct video information in the linux kernel parameters due to it only supporting UGA video. Thanks to 'bean''s patch, I was able to construct a working GRUB2. UPDATE: now with adq's updated patch, we no longer need to use screen.efi as it contains a TextModeHack now - thanks to him for the great hack!


To use it in practice:

Enjoy - if you're a Joggler hacker, come to #mer on irc.freenode.net, a good bunch of us there by now. Webchat here.
Posted by Carsten Munk at 11:20 2 comments:

From the past: How to dump the BIOS (EFI) on Joggler

This was originally discovered by JimboJones. You will need to be on 2.6.24 (the original OS).

The file /tmp/bios.bin will then be the BIOS.
Posted by Carsten Munk at 14:17 1 comment:

Due to the abusive and copyright infringing behaviour of the admins of joggler.info forum, we kindly ask you to not copy content from this blog to the joggler.info forum. It is OK to post links to content here or base solutions on it and then post about it, if you credit us - basically say that your work was based on the information found here.

The longest lasting 'hack the joggler' forum can be found at hackthejoggler.freeforums.org

We're a bunch of Joggler hackers sitting on #mer on irc.freenode.net - feel free to join if these posts interest you. So we can make more of our Jogglers together.

For support, #joggler on irc.freenode.net is a better choice.